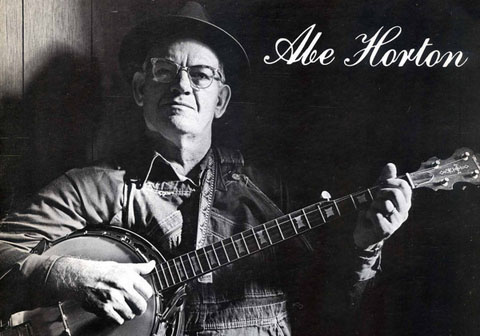 Abe Horton was born in Carroll County, Virginia. on April 11, 1917. He was raised near Big Reed Island Creek and came from a musical family; his father, Denny A. Horton, played banjo and fiddle. Abe started with the fiddle at age eleven and played with his brothers often. Many of the musicians Abe played with were on up in years when he was young. He credits these older musicians as being the source of a lot of the old songs he knows, as well as, his style of playing. A partial list would include the names of Hermon Edmonds, Glen Smith, and Orville and Preston Cox. Perhaps Abe's greatest musical influence was his wife, Annie Mae's grandfather, Friel Webb. Abe's recollections of past days in Carroll County offer a deeper understanding into the music of this region. Following his tour of duty during World War II, Abe dropped out of music for twenty-three years. Around 1970 he started the band, the Pine River Boys and Maybelle. Heritage III and XXI feature their distinctive sound. A solo album, Heritage XIX, portrays other old one songs and tunes by Abe. Harold Beatty Hausenfluck was born March 26. 1952, in Charlottesville, Virginia. From 1956 to 1971, he attended the Virginia School for the Deaf and Blind in Staunton. It was during those years that he first became interested in country music. Some of the first music Harold remembers hearing were older songs his father used to sing. Around 1961, his grandmother found him a "wind up" record player and a few 78 r.p.m. records. The records were of Fiddlin' John Carson and the Virginia Reelers, and he recalls this as the first really old timey music he had heard and it "stuck right with me." The first instrument Harold learned to play was the harmonica at age eight. Soon to follow was the "jawharp" and the guitar. With the guitar he started with an open tuning style and often used a slide. He admits playing some modern type country tunes at first and even a little rock music. Harold's back up guitar praying can be heard on some tunes on this album. The WCKY Jamboree out of Cincinnati and the Grand Ole Opry on WSM Nashville were favorite radio shows during the 1960's. Through them, he heard the banjo styles of Grandpa Jones, Kirk McGee, Oswald, and Stringbean. In 1968.a girlfriend brought Harold an album of the clawhammer banjo music of Wade Ward of Grayson County, Virginia. It was here that "things started clicking." The album notes mentioned the fiddlers' conventions, and in 1969, he and his dad came to the OLD FIDDLERS' Convention in Galax. Harold comes right to the point in describing it as an "eye opener” for him. One lesson he learned at these early conventions, and a good one to pass along to others is "to learn the old time way—you learn from the old timers." From 1971 to 1973, Harold moved to Vancouver, Washington, to further his education in piano servicing. While there, he come into more contact with reissued old time music by such record labels as County and Rounder. In 1973, Harold returned to Richmond, Virginia, where he lives today. Harold first met Abe Horton and his band, the Pine River Boys and Maybelle in 1972 at the fiddlers' convention in Saltville, Virginia. He says he was a "little sheepish" at first, but as he ran into them at other conventions a real friendship developed. Harold and Abe's first album of authentic songs and tunes is available on Heritage XXIII. Harold credits the following musicians as having influenced his fiddling style: John Corson, Norman Edmonds, Lowe Stokes, and Eck Robertson. To a lesser extent he also credits, Tommy Jarrell, Crockett Ward, Boyd (Hick) Edmonds, Glen Smith (Hillsville). and Joseph Hurly (Slim) Smith. Another fiddling Influence of the last few yews is Joe Birchfield of Roan Mountain, Tennessee. Harold's banjo picking, for the most part, has been influenced by Lu McRay, Glen Smith (Hillsville), and Wade Ward. He says he has listened to others, but these three are the main ones of influence. Concerning this present album, Harold states, -if there's not enough dance tunes, gospel songs, or folksongs to suit everyone; considering I'm only thirty-one years old, and that the good die young, I've got a long, long time to live. So Lord willing, there will be more to come." The tradition of passing the music from one generation to the next continues. Abe and Harold's deep respect for the foundations of the music is very evident. It is also more than a relic of the past to them. Old time music is still alive, and it’s played here with spirit and with discriminating good taste. Certainly, these are qualities worth continuing, and ones we should hold high. 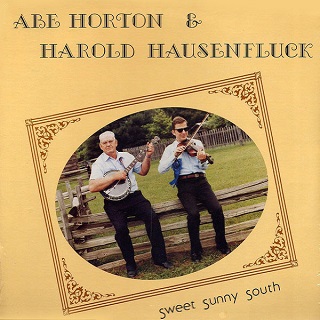